If your doors don't operate properly in the way they close, it can usually be adjusted given some fundamental steps to go by. Although, you may need to become somewhat familiar with your door and the way it is built and has been installed in order to do so.

Occasionally on an interior door and more commonly for an exterior door, one of the hinge screws is larger than the rest (longer and possibly with wider slot head). This attaches the door to the stud and also affects the upper tilt (assuming that it is positioned high, normally the case). By screwing tighter, the door is pulled closer to the jamb which may be enough for it to close properly. Noting that before tightening, if this screw has loosened, there is normally an uneven vertical gap along the door edge to jamb - assuming that it was installed level when it was hung.

It is possible to replace existing hinge screws with larger matching screw(s) to cinch the jamb nearer to the framing. Not only to serve as adjuster screws but to help stabilize the door position. 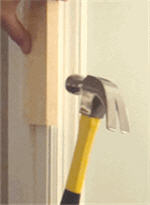 When a door hits the stop unevenly, and by a minor amount - tap it even with a hammer and a block of wood. It should close at the perimeter at the same time. When off by a distance, or if the stop is bowed, it will have to be removed and replaced. Making minor movements toward the outer jamb is likeliest given the flat mould side and the other tapered profile.

To reduce the gap between the door-edge-to-jamb on the latch side, it is possible to gain minimal amounts from the hinge side. Simply place cuts of cardboard or similar behind the hinge plates.

This method, a later resort, is for when there is not enough spacing between the door slab edge and the inner jamb. If the edge hits the jamb or is too-tight to close and must be forced, the options are: to reduce the outer dimension at the edge, to re-shim the jamb, or perhaps, drive long screw(s) in the hinge as described above. Reducing the door by planing makes an assumption that the jamb with casing(s) have been installed square, level and plumb, and could otherwise accept the proper closure - therefore, planing is generally recommended where possibly either; If the door is swollen, first make attempts on drying the wood and once reduced back to the preferred dimension, top and bottom end-cuts should be sealed.

To reduce the door outer edge of a solid wood slab:
The masonite door (like six-panel artificial woodgrains) will have to be removed to although with masonite, the material should be cut rather than planed.

When the door is planed or sawn (and preferably not belt-sanded!) on the handle side, the bolt plate should be chiseled to a lower mortise to remain flush.


Cost of Entry Door Replacement
Prices for the front door.