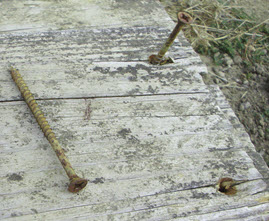 How Much Deck Repair Costs


When decks take on age, they tend to deteriorate and need either repairs or facelifts. Many fixes call for the main beamed structure to be left in place while slats on the deck platform, steps and/or rails are replaced. Repairs can also take the form of failing or questionable attachments, settled or heaved footings or remedying structural concerns.


With fixes priced according to man hours and supplies on the job, each repair assessment will differ in its nature. But many of the same types of conditions continually appear. Also, correcting issues to some areas of the deck may end up acting as a mode of prevention, affecting the structure of connected components. For example, rotting pieces can spread to nearby spots, or a loose railing can destabilize adjoining rails.

The simplest repairs can be as affordable as $15 to $75 for those doing the deck repairs themselves. Like replacing a couple of rotten floor slats, or resecuring a loose handrail. Beyond doing yourself, the handyman option is normally the next, least expensive option followed by the professional deck carpenter - many who have skills at integrating repairs seamlessly back into the intended design.


Attachments - pulling and replacing rusty screw heads can prevent rust stains and should be done to help preserve the deck stability. Too, swapping them out should be done before the screws begin to loose structure to the point where they snap off when being removed or otherwise.

Note: certain formulations of screws have been known to decompose prematurely. Before replacing you may want to contact the manufacturer, if possible, and see if any such warranty covers the screws degrading.

Platform/Stairs/Handrails - all rotting members should be replaced in the interest of the deck and those users it supports. And it is easrer to achieve a closer match given some set time (for weathering of pressure treated replacements) and/or that a solid finish color already exist on the current decking.

Structure & Footings - should always be inspected regularly with the rest of the deck, even where visibility takes added effort.


Landings - those supporting stairs, can settle and bring about unevenness. Replacing pavers or stones with poured footers for support can prolong the life of the stairs - which could be considered a longer term, preventative cost.

Ventilation/Air Circulation - modifying current enclosures, is a custom price solution that should be integrated into the deck architecture. Always keep the floor board gaps clean, which can be done for no cost, to help preserve the deck.


Related Prices: maintaining the surfaces can deter certain affects. As we also look at deck staining costs and the intitial quality integrated into deck building costs both of which may partly determine future repair bills.

Keeping Repairs to a Minimum

Cost To Build a Deck
Building by contractors/DIYer's.