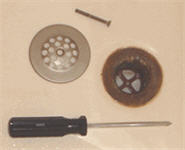 
Due to passing amounts of soap, hair, grime and other contaminants, the tub drain is among the most likely to plug, less the advantage of a trap to clean. It only makes sense to maximize other routes for cleaning.

It might be worth it to pour hot water down the drain, to see if this helps, although it usually has little effect on hair which commonly rinses both here and in the bathroom sink.

1) First begin by removing the drain cap, which is either held in by a phillips retainer screw or by rotating out of its thread. Some of the push-plugs have retainer screws found just under the cap at the side. 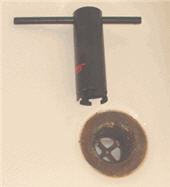 2) Once this is gone, view the opening and pull loose the accumulated hair from the cross brace. Be prepared since it is normally wound in a tangle if it has been there for some time. A pair of thin needle nose pliers are ideal to pull loose the hair and matter. Ideally, pliers with a 90 degree bend accommodate the angle. If you are lucky, try and snag into a dense plug, further in, and slide the waste material back out.

Important: the strainer basket/braces might need to be turned out, to access the line and to remove the clog.

If the pliers won't reach, bend a hook at the end of a coat hangar. Insert this beyond some resistance and turn, pulling it back out. The hook should not be too wide, that it can push the plug yet further into the pipe instead of hooking it. 3) After removing the bulk, let hot water run through the drain. If the drain has not cleared, produce a plunger;

a) Remove the coverplate on the overflow, located straight above the drain. Then force in a rag to airtight.

b) Set the plunger onto the drain, with enough water filled over the suction. Push down and establish somewhat of a vacuum seal before setting the plunger base on evenly. Then, pump it repeatedly, six or eight times at least. And remove it abruptly.

c) If this clears the drain, screw back on the coverplate and next flush the drain with hot running water. If the drain is yet stopped, either repeat the above, or begin to snake it, basically as you would a tougher sink drain but without the advantage of a trap for access. Also, the threaded drain piece will have to be reversed back out for the auger head to pass through, and the tool for this is a tub drain wrench pictured here. Though this has been done with the padded handles of pliers. Have some plumbers putter on hand to re-install.